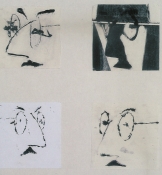 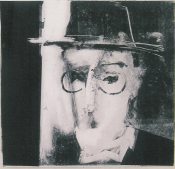 Fernando Pessoa (1885-1931) was a poet who invented a number of characters, or alter egos, which he called his heteronyms. Each one was a complex “real” personality. Each one composed “his own” verse. My  fascination with Pessoa produced a huge output of paintings and drawings that culminated in the “Identity Parade” exhibition. 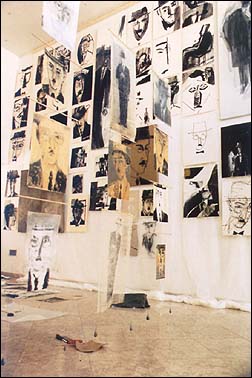 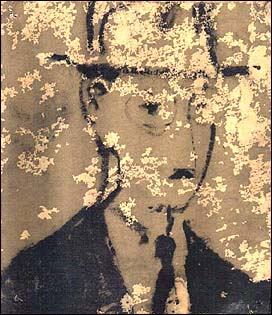 It started with a commission, a simple request for a drawing to go into a book by Zbigniew Kotowicz, “Fernando Pessoa: As vozes de uma alma nomada” (pub. Vega) Published in the UK by Shearsman Books & The Menard Press with the title, Fernando Pessoa: Voices of a Nomadic Soul” (new paragraph) .  Myinterest in Pessoa turned into a fascination. As it grew, so did my output and soon the pile of paintings and drawings turned into a multitude (just like Pessoa himself). The work formed the back-drop to the party to launch the publication of the English version of the same book. 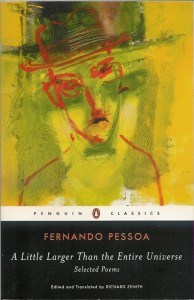 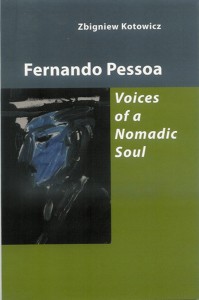 The event was held in a run-down 19th century concert theatre in Charing Cross Road (London’s street of bookshops) and gave rise to the exhibition “Identity Parade”. This is a traveling exhibition, which was first shown in Lisbon, at the Casa Fernando Pessoa, in 1996. It has since gone on to other places in Germany, Latvia and Belgium – museums, a publishing house, galleries and libraries.

“Identity Parade” is a series of rough portraits that try to get under the skin of the poet – the many faces of Pessoa. Each one represents a particular character distinct from any of the others yet all together they come to one and the same person.

I felt an immediate affinity to Pessoa’s work because my painting, so I’m told, looks as if it has been made by many different artists. Fernando Pessoa wrote different sorts of poetry and said they were written by different people. As well as writing under his own name, Pessoa invented seventy-two alter egos, his “writers”. Most make a brief appearance only. Some wrote whole bodies of work, even corresponding with each other and contributing articles to literary journals, each under the name Pessoa had given him. Each one has his own particular point of view, obsessions and mode of expression. The work written under his own name and that of four of his writers is much read and admired the world over.

Rarely published in his lifetime, Pessoa stashed the manuscripts of all these writers in a wooden trunk in his study. After he died in 1935, it was found to contain over twenty-seven thousand documents, which has kept a sizeable industry of Pessoa specialists and scholars busy ever since. The image of the trunk stuffed full of papers is one of the reasons I decided to hang the drawings in an unordered profusion over the walls.

Pessoa died of cirrhosis of the liver at the age of 47. He was not a happy man but was a wicked humorist. After a classical English public school education in South Africa, he returned home whilst still in his teens and never left Lisbon again. All his life he held himself back from any sexual contact with people. Polite, courteous, ever the gentleman, in Auden’s phrase, he was “hurt into poetry”. Totally alienated, he managed to live an extraordinarily rich inner life while finding his own existence in a world inimical to poetic genius very difficult to bear. Born into an era of disintegration and monopoly, he was faced with isolation and loss throughout his life. His closest friend committed suicide at the age of twenty-six. His business venture failed. His writing was of little interest to most of his contemporaries. There was erosion of old certainties, reductionism, mass-production, fragmentation, psychology; the modern world was the challenge he brilliantly surmounted.

The exhibition is my homage to Pessoa’s work. It is also, in part, my own investigation into seeing and comprehension, into questions of authorship, pictorial language and representation.

I wanted to convey a feeling of Pessoa’s multiplicity as well as the sense of his separation into individual parts. I also wanted to give him a prominence that, for most of us, he does not have. So I fixed on the idea of drawing him in person, to make him into an instant icon for anyone who looked.

But never having set eyes on Pessoa (he died long before I was born) I had to take a different approach from what I’d consider to be a real portrait, drawn out of the artist’s own experience of a living person and use repetition as a substitute for real observation. Without that particular reality the artist has to rely on technique, which in itself is not enough to be convincing. We need something more behind it. So, I read and re-read Pessoa and allowed his writing to colour the progress of each drawing.

Although my original intention was not to illustrate individual poems, some drawings do happen to refer to specific poems written by Pessoa under his own name. Most of the drawings are about the kind of character I imagine to lie behind each body of writing.

Having decided that the way to bring an unknown person in mind was to picture him over and over again, I needed a constant to hold it all in place. So what I have done here is use the simple formula of his features – eyebrows, nose, spectacles, moustache (like a joke-shop kit) plus his trade-mark fedora hat – to anchor a bunch of drawings. Dozens and dozens of pictures of the poet’s head: all different, yet somehow all the same.

The repetition acts in a number of ways. It apes the way we learn things by rote by asserting his presence; it instils and reinforces the idea of his existence. One picture of the poet is easily lost and forgotten but over seventy all hung together is a presence we cannot ignore. The repetition allows us to make the transition, back and forth, between the general and the particular, from the overall impression to little things that catch our attention. It acts together with the arrangement of the drawings on the wall to give an added physical dimension to the act of seeing. Having to look up, down, right and left, and sometimes behind us, releases energies that remain locked up when it is only our eyes that roam over individual pictures on a gallery wall. The longer we look the more pronounced the similarities and differences become. The repetition gives the features an iconic aspect, the value of a symbol, in as much as we know what we are looking at no matter how indistinctly those features are rendered. Eventually, it makes us conscious of just how our perception dictates what we see and how we only recognise what we already know. It blurs the object/subject relationship to the point where it brings our own inner processes to the surface and we are able to see how our own thoughts work to shape the picture as much as the drawing acts to give form to what we see. It changes passive sight into active vision. Through repetition the features become so familiar that we can recognise them without thinking which frees us to use our judgement along with our imagination to select, discard and compare different connections and associations. I would like the viewer to find different interpretations and for each interpretation I would like the drawings to offer something additional in return.

Take a look at the second Lisbon Show