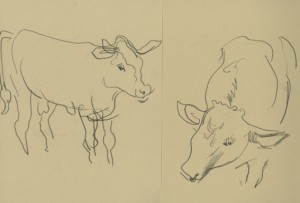 Went to draw livestock in Bucks. A day of big adventure, for some, in that (not so quiet) spot in the country.

Stepped off the country bus between Reading and High Wycombe deep in rural England.  I’d been looking vainly out the window of both the train, between London and Reading, and the bus, as it bounced along the narrow lanes, for herds of cows in the fields. Where do you find one when you want one? They appeared to be as rare as hen’s teeth – but, as the bus drew away, there in front of me, across the road in a farmyard, was a herd of “entires” – young fellers with their tackle intact

I came to be in that spot because I’d mentioned to Stephanie I was looking for a big, ol’ bull to draw and she had done some detective work. Remembering she had read in a newspaper article a reference to a herd of pedigree cattle. She busied herself, pinpointed its location, found out how to get there and packed me off the first fine day that came along. We had to wait weeks and weeks, the weather’s been so bad recently.

The place where the herd had been reported, was a mile and half walk from the bus stop, and when, a couple of hours after I’d arrived, she called to see how I was getting on and had I located the beasts? I had to say I was out in the hot sun, in exactly the same place as the bus had dropped me. And, although it may’ve sounded like a lot of bull, it was for very good reasons I hadn’t moved – there was plenty of action delaying my plan to walk up the valley – with men falling out of the sky and red hot metal on hooves – a horse being shod next to me from a forge in the back of a van.

A white transit van had pulled into yard, behind where I was drawing the young bulls. The farmer walked a beautiful grey around the corner by a rope halter and stopped next to where it was parked. I glanced over my shoulder to look and seeing a blacksmith about to shoe the horse there and then in the yard, the focus of my drawing did shift from cow to horse double-quick. 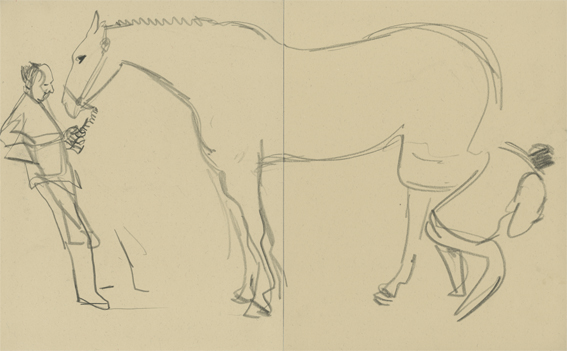 Half-way through the shoeing the blacksmith asked the farmer, “Have they done the jump yet?”

“They’re due to do it about now.” The farmer replied, looking at his watch.

“No, not all, you can cut across the field round the back of the stable to get there.”

There’d been a clattering of helicopter blades while I’d been drawing the young bulls but hadn’t paid it much mind, their bovine curiosity as to what I was up to more ‘an enough fulfilled that impulse in me. And anyway, the scene in the farmyard, with the farmer gently, tenderly, examining the grey in the bright sunlight framed by a geometry of strong shadow, was more to my liking.

As is the way, I didn’t scan the one drawing with the two bird-men winging their way to earth – –  two little diagonal dashes in  the sky above the stables. I stepped back to look across the fields to see the first one slice into a three-storey high stack of cardboard boxes and the second one open his red ‘n’ white striped parachute wing to come fluttering down. Gary Connery, the first man in Britain to step away, land uninjured, after jumping from half a mile up in the air without opening his parachute. Looking at the Hummers and trucks drawn up alongside I did think, free-fall = very expensive kit.

The blacksmith from Twyford and his two apprentices returned, and, no longer in a hurry, took extra care and attention with the grey’s softer than usual hooves. 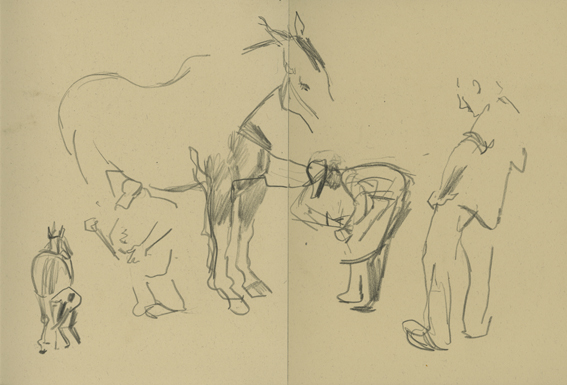 How did I come to be searching for cows to draw? (…and getting distracted.) Ah well, that’s another story.