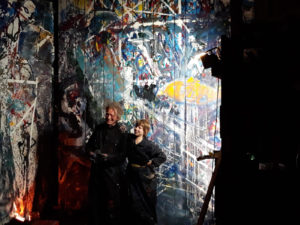 Here be snaps of m’Berlin performance,
“Pop Jackson’s Bollock”
Took your advice to heart
(not to be boring…..)
You’ll see
I found a handy help-mate and muso to play along.

Tho’ t’was touch & go whether I would or no
made me anxious
couldn’t say as much because it had to be fun, where free-spirits roam etc.,

Happy chance to find the peeps,
not so easy to keep the thing afloat,
a wobble here, a trouble there, it’s more my debt to fortune than my overdraft
which saw me through each time disaster looked me in the eye.
Lucky, several times over, that it came together.

That and being preoccupied with a plan of how it would go
to keep it from being….,
dull
and
boring
while pretending not to attach too much importance to it
probably made me boring but in the end it worked.
So much so that Moritz Tonn, the bloke in charge, thought we were a team which went round the world
putting on performances. Perhaps I shouldn’t have told him, because
he looked shocked, maybe even disappointed, when I said we’d only met up
the day before. Anyway here are the photos
taken by my friend Paul Mecky,
(who got his best, silk, wedding shirt, hand-made in the East, sprayed & splattered in the process)
of Lorraine Durgeloh, co-painter, Markus Krispel, saxophonist and me
in action. 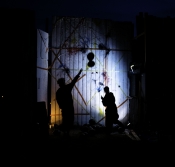