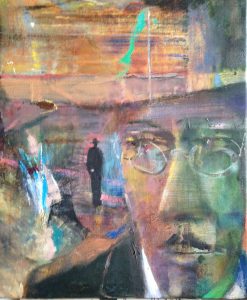 he most recent addition to “Identity Parade”, the series devoted to Fernando Pessoa.  It is one of a set of 20 x 24 inch canvases which I began in 2013.  The others came together quite quickly, but not this one.  Because I wanted both to tease out and impose an image (or three) it involved a deal of trial and error to try to find some kind of balance….  Why the make up of a picture should have overly complex intentions is questionable.  But whatever the reasoning behind it, the painterly task I (sometimes) give myself is to see whether an absurd set of criteria can hold together and still work as a painting.  I think this one does, it has a strange power – maybe, if you can bear with its narrative aspect, understand the characters involved and are able to stomach density, richness and colour – then it works.

Getting to know you

From the beginning, long before I started making portraits of Fernando Pessoa, critics have been saying that my work looks as though it has been painted by a number of different artists. Although personally I never find a problem with the concept of working in a diversity of idiom, it is generally expected of artists, by critics and public alike, that they should acquire and develop a singular style, without really deviating from it.  So when I discovered Fernando Pessoa, through my friend Zbigniew Kotowicz writing a book about him, I was fascinated to learn the way Pessoa wrote, using his heteronyms. There are two things about this which struck me as significant, firstly the business of becoming a character, like a method actor, who then writes as his new personality dictates. Secondly, how outwardly there’s no change. No matter who he becomes and whichever author he is writing as, Pessoa’s physical appearance, the style of his dress hardly varies; the cut of his suit is always of a man in society, never of an outsider. The few photographs there are of Fernando Pessoa provide little clue to his inner life but they ground the iconography and form the image which remains – reserved, discreet and dapper.  At the time this was the modernist way; to dress in strict bourgeois fashion while producing wild and shocking art. END_OF_DOCUMENT_TOKEN_TO_BE_REPLACED