My good friend and colleague, Martin Ursell, is altogether a much better person at keeping in touch with people.  He heard from  Joanna, a graduate student of ours

from a few years ago, that my presence on social media had increased DRAMATICALLY.  Which made us both laugh.  It’s only funny if you know I don’t look at computers, or I didn’t until this contemporary version of the plague, Covid-19, came along.

When Lockdown was introduced I opened the cupboard where the computer hibernates, blew the dust off its cover and brought it blinking into day.

Going from nothing to something may seem like an an event, it doesn’t mean you’re going to be gaining anything by it – the couch potato decides to start at super-athlete level – I skip the first steps and turn to page 94 imagining I would film and edit a course of lessons about drawing and painting.  Star jumps, somersaults from scratch, where does that land you?  Mental sprain.

Back to the start line.  But nonetheless, while repairing to the sidelines to begin to learn the basic, fundamental stuff,  a handful of friends are helping me – my pal, Diane, and neice, Nicole, with the online tutorials, editing and getting them into shape, Steve B patiently steering a rudderless crew who barely know the difference between a file and a folder, that’s me, into calmer waters.  (Let’s 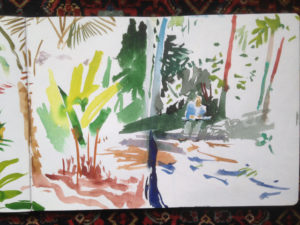 The way I’m doing this is not quite the way Instagram works, Cassius is politely trying to steer me into getting it.  Isn’t the idea that it’s about what’s happening now, this instant, today?  Get it, got it, gone!!  Would seem to me to be it’s motto.

The first and, up until recently, until this Corona virus-time, the last time I looked at Instagram was soon after its launch when it was a brand new app on a Magnum photographer’s phone.  Not so new that he didn’t already have tens, hundreds of thousands of followers, telling my friend, Sevil, as he snapped and posted a shot of her terrarium, that with a single click a quarter million people will know about this beautiful thing you’ve made.

And sure enough, in no time at all, there was a queue of comments on his phone, only they all seemed to be from snarky, snidey, sneering sods hurling dung bats of miserable invective at his enthusiastic endorsmen 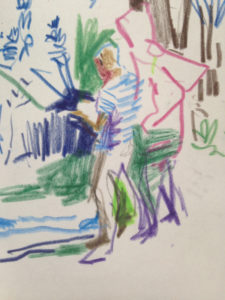 t of his pal’s endeavours.  My introduction to trolling.

Still haven’t got to what I wanted to point out about memory when I started this post.  Two things, one is about how quickly the instant here and now turns into history and how does it work when you do the reverse and bring an unknown story into the light?  And the other is how we r what we do remember.  The thought began with a drawing of my friend, Martin, standing drawing with someone next to him looking over his shoulder while he’s working.  An image which Cassius posted the other day on Instagram.

All intensely lived experiences remain close by us all our lives, the memories triggered instantly back to life again, by almost anything.  At the same time I am quite prepared to accept that every memory is reworked as it is recalled, reinvented as it is retold.  This was brought home to me in particular when I looked again at the complete drawing and not just the detail of Martin drawing and the scene I remembered suddenly expanded WOOSH! Out to the horizon and the ocean a thousand metres below. 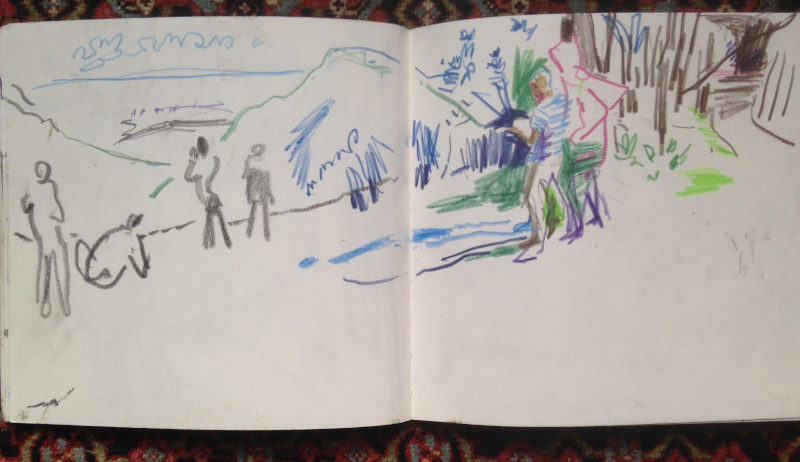