Was it a commision, a task, or an artwork? M 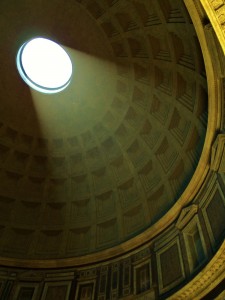 y job was to provide a dot, full-stop or period to mark the abbreviation for Doctor, as in Dr.

Dr. Phil Shaw was retiring (Ha! He’s never that – a showman to his bootstraps) but at 65 he was leaving the Faculty to spend more time with his genius.

The plan was that eleven of his artist colleagues would each produce one letter (including the dot).  The format, a 10 cm x 10 cm square.  To be presented to him at his farewell do.  We would draw lots to decide who did which.  I drew the dot.

Okay, so what do I do?  Fire a matchstick from a toy cannon with an inky head?  Take a rivet hole punch to it?  Grow a spot of mold on a drop of juice?  Burn a hole, that’s what. 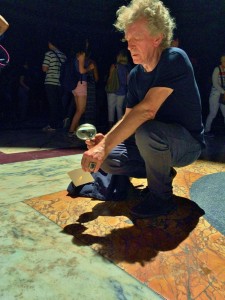 Fire, yes!  One of the four ancient elements, but to channel it, how?  First notion to pop up as I pondered – heat up a rod of iron, the iron the Earth is made of, and use that to burn a hole?  Hmm…  That speaks to me of Vulcan and furnaces.  Vulcan may have married Venus, the goddess of love and beauty, but taking a red-hot poker to burn our hole?  OooNo, Berkeley Castle, King Edward II.., not the kind of associations we’re after.  I feel something less heavy, lighter…, lighter?  Of course, the Sun and a magnifying glass to focus its rays.  That should do it.  But what do I do?  Wait for a break in the clouds?  At the time where I was in North London it had been overcast for weeks.  My friend, the artist, Bolan Chen, was arriving from Japan and we were going to Rome.  We would be there on midsummer’s day, perfect, the Sun at its zenith. 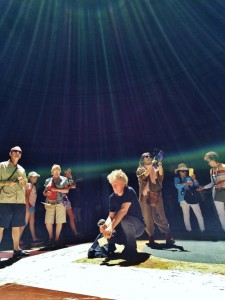 e place, some significant spot, the occulous in The Pantheon at noon on Midsummer’s day couldn’t be better.  So that is where we headed.  I stood at the base of a steeply angled column of bright white sunlight dazzling in from the top of the dome, a solid beam of light reaching from roof to floor.  Bolan held his camera ready and I held the square of (Somerset 250gm cotton rag) paper in one hand and my favorite antique magnifying glass in the other and concentrated on focusing the small circle of light through the lens onto the middle of the square.  It seemed to be burning more into my retina than on the paper.  For what seems like ages nothing happens then suddenly, in an instant without warning, it goes through and a small point is made.  For the light to shine through.  The dotty in Dr. Phil Shaw!