These paintings are going into a film, Dreaming Istanbul, directed by Gilles Blaize & Julien Tréfouël, which is being made to celebrate Istanbul being European City of Culture in 2010.
It is easier to describe how they came to be made and what they’re for rather than what they are all about.

As I painted them I photographed them at every stage for Gilles to turn them into animations (now “we’ve moved on” from using a film camera and no longer shoot all the frames as we go, he has to edit them afterwards) – little ten second transformations morphing from the photograph into the painted image.

Every so often during the film the frame freezes and a stop-motion animation begins.
How to describe the way it breaks into the action? Like a song in a musical?
A succession of illuminated interludes,  tiny episodes of visual play toying with appearances and engaging with our imaginative powers… Hmm… all that,
but quite how each fits with the narrative is something I’m going to have to discover.

Certainly, they’re all about Istanbul in the sense that having absorbed aspects of the city while sketching out in the streets and spaces at all hours I can’t help but incorporate something of the character and atmosphere of the place into the improvisations that grow  out of my reverie over each of the pictures – a reverie which turns the photograph into abstract pattern and texture which then automatically invites the creation and suggestion of other forms.

Not knowing what the painting will be before I begin gazing at the photograph, I’ve no idea whether it’ll end up being a belly-dancer or a frog. It’s obvious what conection belly-dancing has with Istanbul but the frog? However that painting was the favorite choice of the papers and magazines that ran articles on my last exhibition there, it was the picture they all chose as an illustration to the text.

The past couple of years
I’ve been making different sets of work, drawings, paintings and prints, based on Istanbul
this is one sort – never know quite what to call ’em –
over-paintings, interventions, altered states,

dubbed photos,,,,
as if finding the right name, like for the patient with a mystery ailment who immediately feels better when it is eventually diagnosed just because it has a name
believing the condition will be as good as cured
once it has been identified and recognised

Well, such as they are, these be figments of my imagination,

drawn on the city
scratching its surface –
shape-shifting stills
from Dreaming Istanbul,
a film in the making
by Gilles Blaize & Julien Tréfouël 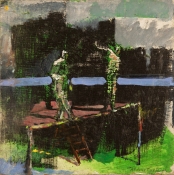