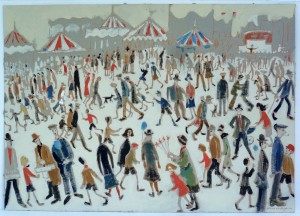 Two bits of work have been occupying me these past few weeks – editing a film with Gilles and a bunch of paintings to do for a tv drama. Its working title is “White Heat”, and one of the main characters is an artist, the script calls for quite a few pictures over the course of six episodes, in different styles, and it was my job to make ’em,

Pages: 1 2
A film directed by Gilles Blaize
Gilles Blaize’s “Aldous in London” is a short documentary with something of the dramatic structure of a musical – breaking into, not song but, interludes of painted animations. Gilles had the notion of extending what I had done in “New York New Work” and wanted to see how the over-painting would work if it was incorporated into live-action footage. The idea was to replace the postcard with a film-still so that the animation would move seamlessly between film photography of real life and the painting being dubbed onto the scene.
We recorded over two days. The first day Gilles interviewed me in the studio, on the second day he filmed me going out drawing; together we took a stroll from the old place in Charing Cross Road down to the Thames and over the river to Waterloo. (I didn’t know it then that is where I’d be moving my studio to.)
The plan was to make a five minute try-out but once Gilles had edited what he wanted from the interview he had twenty minutes of  my pub pundit cod philosophy to cut and fit his film around. A  job which he spent the next few months doing. Time which included capturing the stop-motion footage for all the animations (an unexpected technical problem he discovered came with the vibrations from the tunnelling for Eurostar going on at the time which meant Gilles having to reallign and adjust almost every frame!) Each of the animations had a piece of music appropriate to them composed by Dryden Hawkins; to find an individual musical identity for each of the animations  can be a bit tricky, particularly when some of the painting takes ten seconds to materialise. He did a great job with the sound, as I think you’ll agree. We’re a team; Dryden, Gilles and myself. Hope you enjoy our efforts.

These paintings are going into a film, Dreaming Istanbul, directed by Gilles Blaize & Julien Tréfouël, which is being made to celebrate Istanbul being European City of Culture in 2010.
It is easier to describe how they came to be made and what they’re for rather than what they are all about.

As I painted them I photographed them at every stage for Gilles to turn them into animations (now “we’ve moved on” from using a film camera and no longer shoot all the frames as we go, he has to edit them afterwards) – little ten second transformations morphing from the photograph into the painted image.

Every so often during the film the frame freezes and a stop-motion animation begins.
How to describe the way it breaks into the action? Like a song in a musical? END_OF_DOCUMENT_TOKEN_TO_BE_REPLACED

At the moment still trying to get on with paintings for Gilles’ film, Dreaming Istanbul, what with one thing and another, am having to work nights under the lights with the canvas (actually alternating between a photograph and a blue screen – as I’m doing each one twice) in front of the camera.
You know the technique, stop-motion, I paint a bit take a photo, paint a bit more ‘n’ take another photo and so on till the picture’s done and then when it’s played back as a film (at 24 frames a second) you can watch the painting grow and take shape.
There are 15 or 16 left to do – the animations break into the live-action as they did in Aldous in London like songs in a musical and the reason that I’m painting the images twice over is that the photograph I dub the painting on top of always has different qualities of tone and colour to the film’s which creates a visual discontinuity, a jump in the optical quality whenever an animation is about to begin, which if it doesn’t spoil the surprise is kind of irritating after a while. To get over this problem I paint the interventions that I put onto the photograph onto a plain blue screen which is later filtered out and turns transparent in post-production. So the idea is that there’ll be a smooth transition from the moment the frame freezes to the appearance of the first brush strokes.
Well, Gilles is onto that, poor fellow, he’s not just editing all the pictures into a fluid sequence but having to adjust them as well because now we’re doing this digitally instead of as before with a 35mm film camera (“It’s the way forward, Aldous.”) the Nikon D40 I’m using is always compensating for every tonal change I paint even though everything on the camera is switched to manual, so a patch of white paint makes the image go darker and a spot of black paint, lighter. Not to mention, tiny movements to the position of the camera (it’s fixed onto the wall at the top of the house) which means Gilles is also having to align the little bleeders. END_OF_DOCUMENT_TOKEN_TO_BE_REPLACED