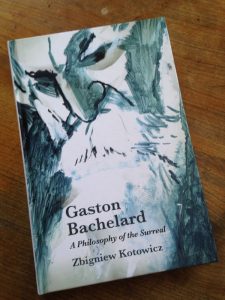 world appears…, to Gaston Bachelard everything ordinary has an extraordinary something.

Years ago, back in the day of the independent book shop, while browsing in one (opposite, what was then, the Czechoslovakian embassy) I came across The Poetics of Space.  The paperback English translation had been recently published by Beacon Press. I’d never heard of it.

I bought the book for its title (after the standard test: – open a page at random, begin reading anywhere, see if I want to keep going.., try same a few more times – if all good – buy).  Eventually, one or two studios later, I got around to opening it (again).

Whatever prompted me to start reading Bachelard’s book, I must have been primed and ready because it changed me – the Poetics of Space gave me, quite simply and dramatically, a new view of the world, other ways to perceive things, tools to open up my thinking.

It’s written in plain, clear and direct language.  Which doesn’t mean it’s good for a quick read.  He gives you so much to chew on.  It’s so packed with ideas it can take me an age to get through a page.  Often a few lines of simple prose contain so much for me to ponder – setting off trains of thought which might play out for days!

Quite the opposite of the, often convoluted, language in the theoretical texts I was used to at college.  The kind in which one has untangle the discourse to tease out the sense to find out whether it is even a point worthwhile considering in there.

Bachelard is one of my heroes.  He counts in France, he’s important, if under-valued in Anglo-Saxon thought.  Over the years many of his ideas have entered the mainstream without journalists and commentators being aware from where or who they’ve come from.  Now we have the first book about Gaston Bachelard and all his work in English, published by Edinburgh University Press.   Massively encompassing, written by my friend Z. K. in his usual succinct style.  With A. E.’s drawing on the cover.  We’ll see how it sells and whether it helps!

It was a big thing – the opportunity to do the cover – not only because of Bachelard’s significance to me personally but for his status in the world of letters.  I felt a sense of responsibility to do the fellow proud.   And make an eye-catching image good enough.  What would make me happy when it gets to the bookshops is that the book acts on people the way the Poetics of Space worked on me when I first saw it – make you want to pick it up, hold & own.  And read!  Even to work a change in you!!